We have reported about the pioneering economic research eBay Inc. has commissioned from a team of external economists comparing international trade flows offline and on eBay and studying the exporting behavior of  small business retailers. Further crunching of the data confirms the significant role online marketplaces play for SME growth and market integration.

First, trade costs that impede EU cross-border transactions are as much as seven times lower for transactions happening on eBay compared to offline transactions. Basically, this means that transactions happen on eBay despite the buyer and seller being countries apart. The reason is that online marketplaces help buyers and sellers overcome trade costs such as search, trust and information barriers that, as this research shows, have a significant impact on distant buyers’ and sellers’ ability to connect and willingness to transact.

Second, the lower trade costs we experience online enable exporting. Intra-EU cross-border trade has grown six times faster on eBay compared to offline for the period 2004 to 2010. And comparing exporting behavior on eBay and offline, the chart below illustrates how online marketplaces empower small business retailers to expand into foreign markets whereas offline exporting is almost exclusively the privilege of larger firms. 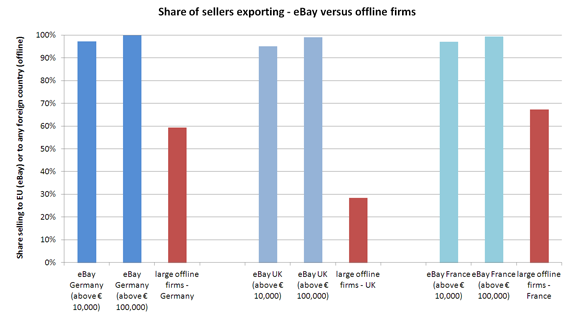 Third, the lower trade costs also translate into consumer welfare gains. The economists conducted a thought experiment: How much could end-consumers gain if trade costs for intra-EU trade were as low as online trade costs? The chart below plots the potential welfare gains in terms of changes (in %) in real income. If (hypothetically) all EU trade were to be conducted at the lower online trade costs, consumers could gain up to 45% of GDP from access to wider selection and competitive prices. The European Commission has itself conducted a similar experiment. The estimate was that consumer welfare gains (in terms of lower online prices and wider choice) would amount to €204 billion would e-commerce grow to 15% of the total retail sector and internal market barriers be eliminated.

Explore How the eBay Marketplace is Creating Opportunity for All