eBay for Charity Announces a Record-Breaking Year of Community Support

*This blog originally appeared on eBayinc.com 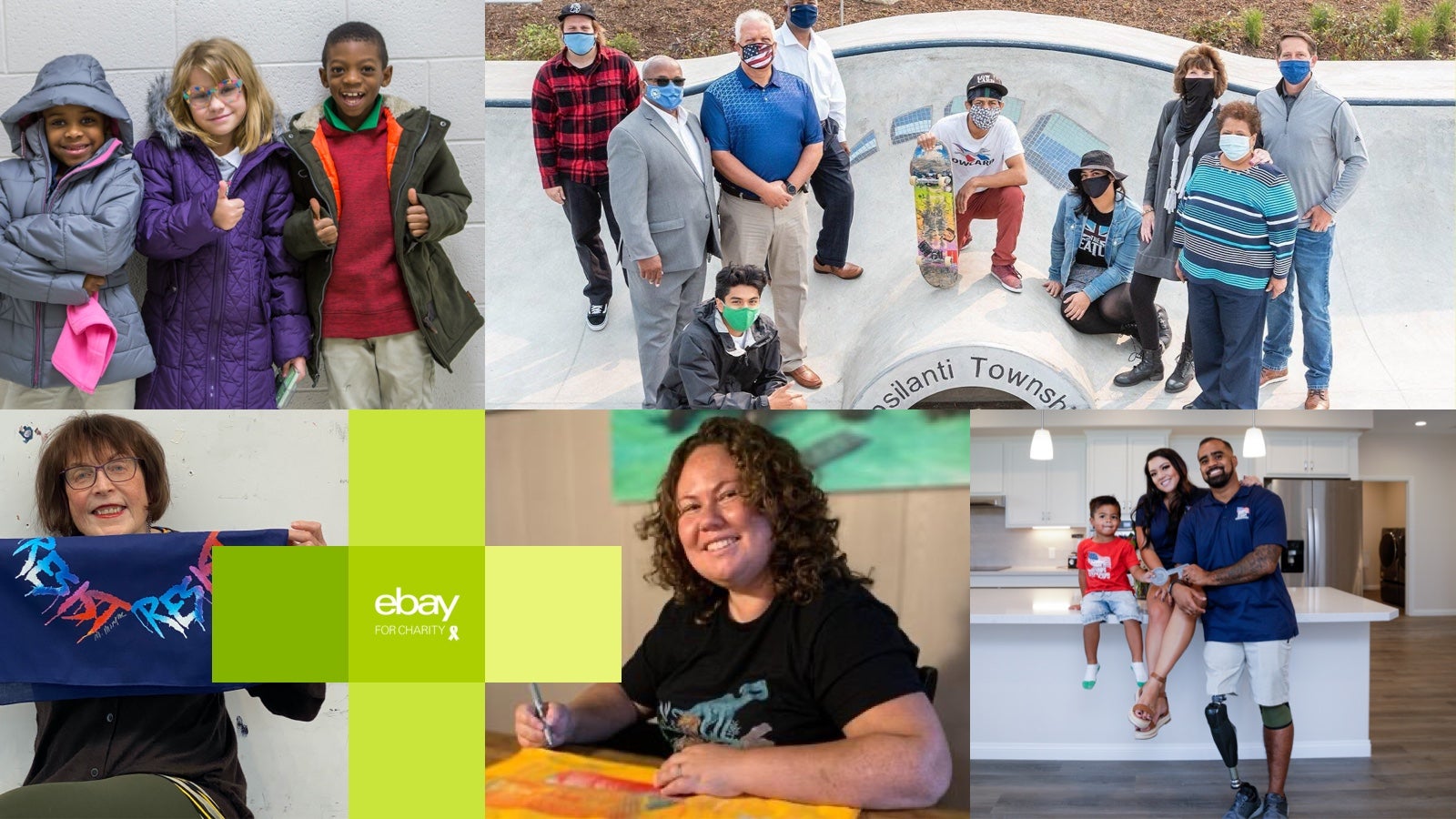 Over 25 years ago, our founder, Pierre Omidyar, built eBay around people, creating a global community centering around connection and fueling economic empowerment. This has never been more true than now. Over the past year, despite facing unprecedented challenges, our community has inspired us with their charitable giving and stepped up to help others like never before. For the third year in a row, eBay for Charity broke all records, raising a total of nearly $123 million globally in charitable donations through the eBay marketplace.

With an increase of nearly 10 percent over the previous year, more than $234 was raised every minute through our platform — and 100 percent of the funds go back to the nonprofits. Last year, there were more than 21 million live charity listings that helped support a wide variety of nonprofits, including Heifer International, ASPCA, NHS Charities Together, Homes for Our Troops, British Heart Foundation and The Skatepark Project.

“Though the past year proved to be a challenging one for many, we are incredibly proud and grateful to our community for their outpouring of charitable giving and nonprofit support,” said eBay President and CEO Jamie Iannone. “We continue to be inspired by the tremendous spirit of generosity shown by our buyers and sellers and their partnership through eBay for Charity.”

Support at All Levels

The British Heart Foundation (BHF) is one of the organizations supported by our community. The U.K.’s largest funder of research into heart and circulatory disease in the U.K., many advancements in heart health can be attributed to the BHF. Yet the nonprofit receives no government funding, but rather relies entirely on fundraising and efforts such as the BHF eBay for Charity shop to support their programs. “We have become the second-largest eBay for Charity retailer in the world, and recently hit the milestone of one million transactions since launch,” said Commercial Director of BHF Mike Taylor. “This past year, we made enough net profit from our eBay store to fund a significant number of research programs at universities around the U.K.”

This funding has been particularly important over the past year, since people with heart and circulatory disease are especially at risk for COVID-19, and as a result, BHF refocused research on this area — and their staff reflects this at the most personal level of dedication. “One of our cardiac nurses, Victoria, took a leave of absence from BHF to volunteer on COVID wards in April,” said Mike. “Her first night on the ward, she comforted a lady dying alone. That story meant a huge amount to the BHF teams and helped galvanize our commitment to do everything we can to fund and support the fight against the coronavirus.” 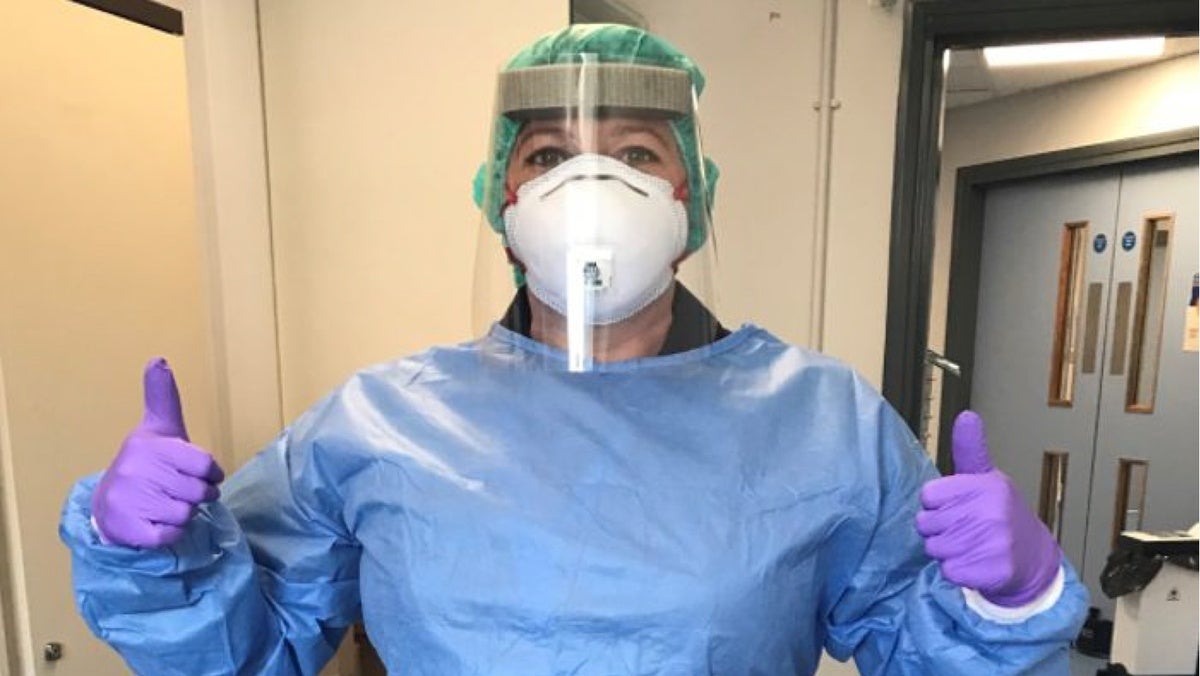 Nurse Victoria of the BHF on a COVID-19 ward

eBay for Charity also helps much smaller charities, with measures of support equally important and vital to their communities. One such example is The Skatepark Project, which helps people create safe and inclusive skateparks for youth by offering grants in the U.S. as well as guidance and technical assistance all across the world, helping to foster community and promote physical and mental health and wellbeing. “From a group of ten year olds in Nebraska raising funds for a skatepark to a mother of two advocating to legalize a famous skate spot in the U.K., we get to see it all,” said Program Manager of The Skatepark Project Alec Beck. “There are just too many heartwarming and impressive stories of local change to mention.”

During the global pandemic, outdoor spaces where youth could safely exercise and physically distance became even more necessary and The Skatepark Project’s presence on eBay for Charity helped their organization continue raising critical funds to support their programs. “If this past year has shown us anything, it’s that access to free, outdoor, public recreational spaces for youth are critical and we need to continue prioritizing this very important work,” said Alec. “We are grateful for the ongoing support from eBay for Charity that continues to help make these parks a reality!” 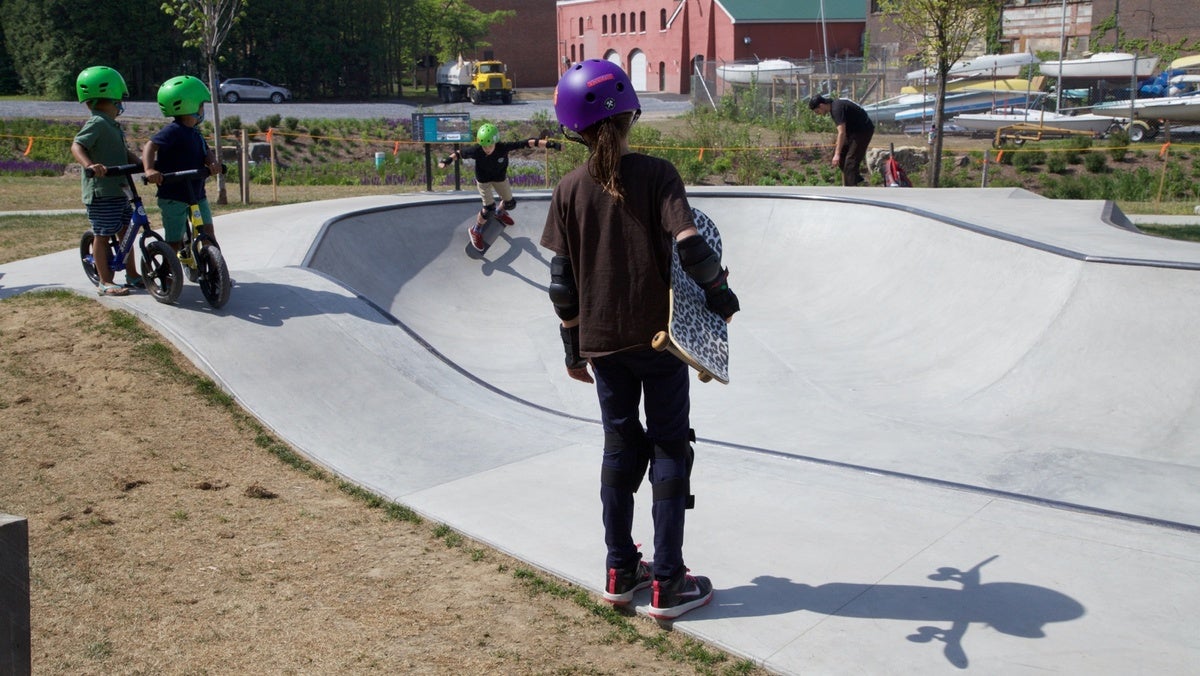 A new skatepark in Burlington, VT

Inspired Responses During a Unique Year

Last year, COVID-19 impacted nonprofits and their usual methods of fundraising. Auctions could no longer be held in person, and events were cancelled across the board. To help, eBay for Charity and our community pivoted quickly in response. Between April and May 2020, eBay partnered with Direct Relief, Feeding America and Opportunity Fund on a special campaign in which we encouraged sellers to donate between 10 to 100 percent of their sales to one of these three organizations. As a result, over $680,000 was raised through community sales — and eBay matched funds so that a total of $1.3 million benefited our partner charities. 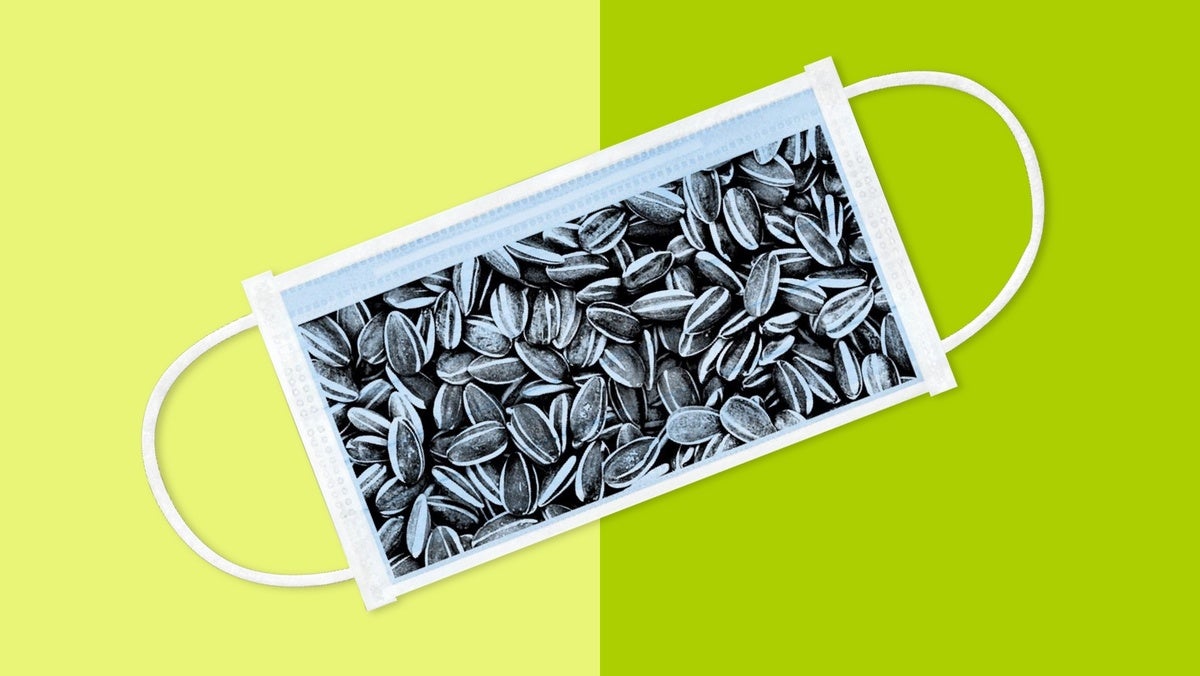 One of Ai Weiwei’s masks

To support the uprooting of systemic racism and inequity, eBay for Charity also worked on a number of social justice campaigns last year. Through various activations, the NAACP LDF raised over $180,000 on eBay. In addition, eBay for Charity also partnered with 15 artists including Shepard Fairey, Jenny Holzer and Luchita Hurtado to sell exclusive artist-designed bandanas. The campaign was called Artists Band Together and benefited Mijente, Rise and Woke Vote which are key organizations working to increase voter turnout in 2020 U.S. elections. Over 5,000 individual bandanas sold, raising over $300,000 for this effort. 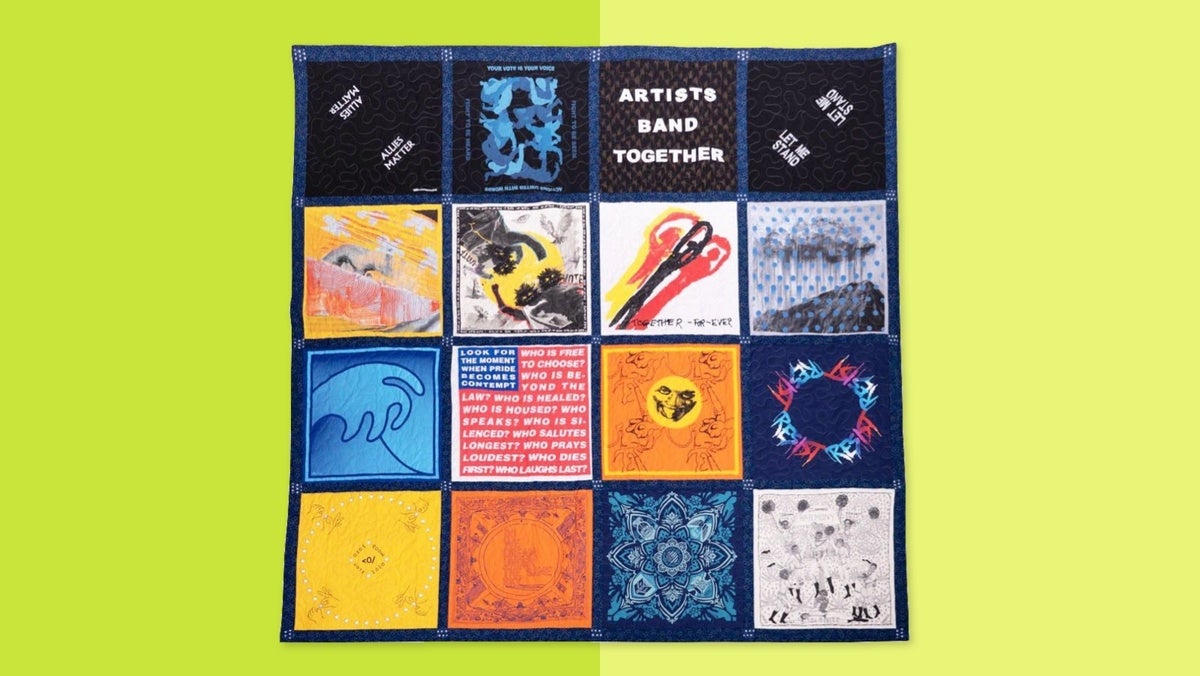 Some of the bandanas from Artists Band Together

It wasn’t just fundraising that increased significantly through eBay for Charity in 2020; the number of nonprofits on the platform rose as well. Last year, there were more than 101,000 charities on the eBay for Charity platform — more than a 20 percent increase over the previous year.

One notable new partnership was between eBay for Charity and the Andy Warhol Foundation, to sell original drawings, prints and vintage posters. The initial sale launched on Dec. 1 and featured the first edition of the Andy Warhol “Love, Sex and Desire” book by TASCHEN, and also included the original line drawings featured in the book, and the second sale, Happy Warholidays, launched on Dec. 8 and featured more iconic art. So far, over $170,000 has been raised, with additional partnership campaigns planned throughout 2021.

Overall, the top charities to be favorited by our community in the U.S. were the St. Jude Children’s Research Hospital, the American Red Cross and the ASPCA. In the U.K. the most favorited charities on our platform were NHS Charities Together, Cancer Research U.K. and the British Heart Foundation.

About eBay for Charity

eBay for Charity is a program that allows everyone to experience the joy of giving to nonprofits. Every time a user buys or sells on our marketplace, it’s an opportunity for our customers to support causes that matter most to them. Sellers can donate up to 100 percent of the proceeds to a charity of their choice, while buyers can add a donation to their purchase during checkout. To date, over $1.1 billion dollars has been raised for charity by the eBay community. Visit eBayforCharity.org to learn more about how you can work with eBay to support a good cause.

Plus updates on Gubernatorial candidates in AL, NV and NY.