Listen to a summary of this post from our colleague Georgiana on the latest episode of the eBay Main Street Minute:

Regional economic disparities continue to plague Europe, and while policymakers have had some meaningful successes at the country-level, inside many European markets regional imbalances are rife and getting worse.  National capital regions, increasingly home to younger, more highly educated, and more productive citizens, are accelerating as growth hubs.  Their “magnetic” ability to concentrate entrepreneurs, workers and financial capital threatens to reduce market opportunities in other regions, depress national economic potential, and undermine political, economic, and social cohesion.

Today, we released a new report indicating that the level playing field offered by the eBay marketplace is helping to counter the trend of capital city dominance in many countries across Europe.  While country-by-country, Europe’s national capital regions are nearly always first in key measures including GDP per capita and urban density, and often by a significant margin, eBay’s “Digital Density” index presents a different and far more balanced picture.  Our findings show the most robust eBay selling communities come from a wide mix of regions whether viewed through the lens of geography, GDP per capita, population, population density or other economic measures, with regions home to vital secondary cities, rural communities, and even some of Europe’s most economically challenged areas, rising near, and even to the top.

The report also details how eBay has transformed the ability of small businesses to reach shoppers worldwide.  The success of small enterprises to engage in trade offers one set of striking and measurable contrasts between traditional and digital business models. Across the 28 European markets studied, 97 percent of all eBay-enabled small businesses export, while just over 6 percent of traditional European businesses sell across borders.  The eBay-enabled small business exporters in the 27 EU markets average 20 different international destination markets, and those in the UK average 23, far outstripping the single digit results of traditional traders.  Collectively, the eBay small business communities in each market have the global export reach of corporate giants.

These findings demonstrate that digitally-enabled small businesses in every region of Europe are succeeding, proving that the eBay marketplace is opening new opportunities for entrepreneurs - locally, regionally, nationally across Europe, and around the world.  Policies and public investments that facilitate ecommerce by small businesses therefore offer more than just additional economic growth. Instead, they can disproportionately pay dividends in regions that are otherwise falling behind the growth hotspots, spurring inclusive growth that also promotes social cohesion.

Minor cities and rural areas are emerging thanks to digitization. Independent small businesses are able to reach national and global markets through ecommerce, offering more choices to consumers and creating new sources of employment: 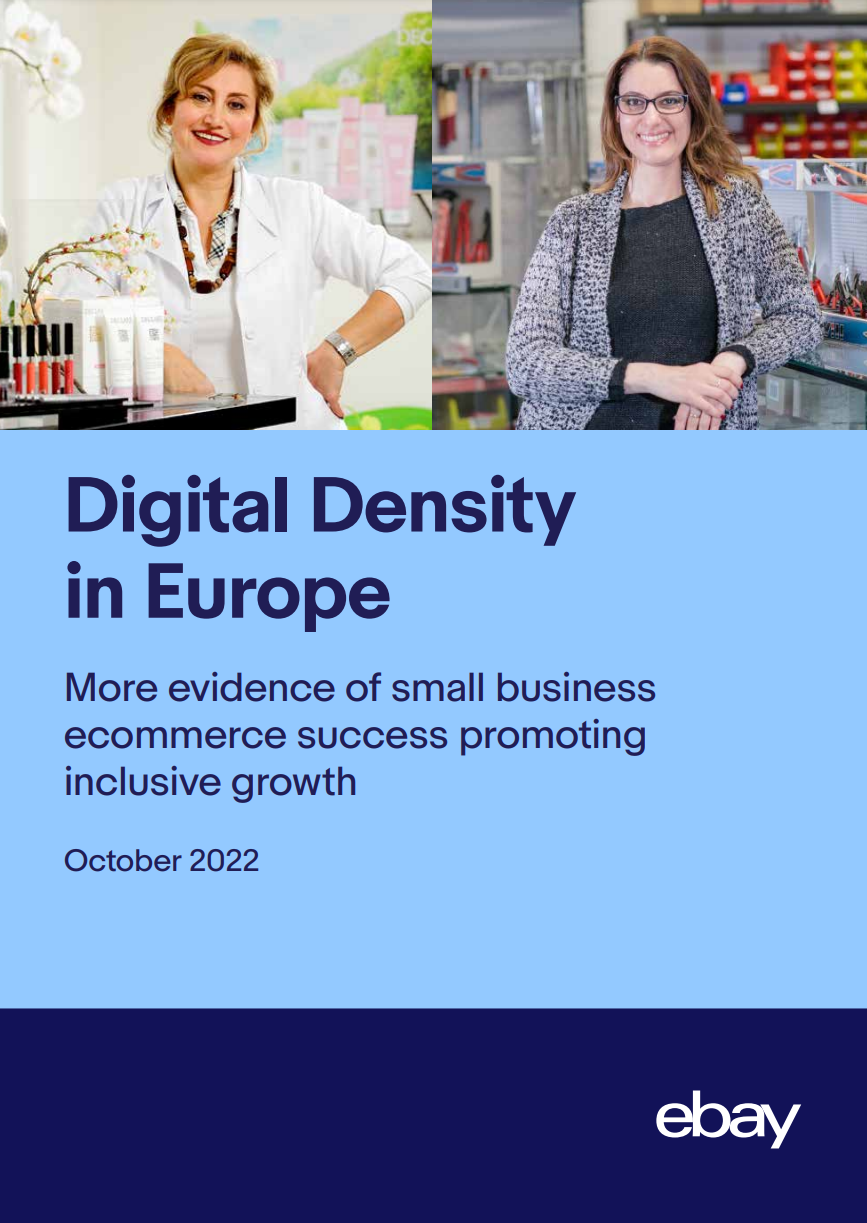 Stimulating the growth of such areas should be a priority for European and national policymakers, for example by implementing public policies and investments that facilitate ecommerce access to SMEs.

Read the full report here or by clicking on the cover image of the report here to the right.